The “30,000 foot view” of the business is a common phrase used to describe getting to a high enough level to see the big picture. The next time you’re in a commercial airplane and cruising around 30,000 feet, take a look out the window and note what you see—some clouds, large swaths of land, maybe a mountain range. The reality is you’re too high up to see much of anything with any precision. Take a helicopter between 500 to 1,000 feet and you’ll be able to clearly recognize what you’re looking at, with the benefit of seeing it from a new, higher perspective. Buildings, homes, bridges, and roads are seen in a more revealing way because of the elevation, while important details are still clear to the eye.

To elevate means to lift up, or to raise to a higher rank or intellectual level. A helicopter is arguably the most precise, agile vehicle for physically raising a person up to considerable heights. Unlike fixed-wing aircraft (planes), helicopters are able to hover in one position for extended periods of time, ranging from a few feet above the ground to more than 36,000 feet high. One of the biggest challenges I continually hear from CEOs and talent management leaders is, “We need to elevate our manager’s thinking.” In essence, they’re saying that managers need to be able to quickly elevate their thinking from down in the tactical weeds of day-to-day operations to a higher level. At this higher level, they can expand their perspective to understand how the core foundational elements of their business fit together and provide superior value to customers. The challenge of taking time to elevate one’s thinking is supported by an Economist Intelligence Unit survey in which 64 percent of managers in bottom-performing companies cited the challenge: “We are too busy fighting the daily battles to step back.”

A helicopter has the agility to navigate within congested areas, such as skyscraper-filled cities, and also get to remote areas not accessible by any other means, such as mountaintops, giving them unmatched versatility. This versatility translates into a variety of functions rang- ing from emergency medical transport to aerial attacks by military forces. As author James Chiles wrote, “Of all birds, winged mammals and insects, very few have mastered the skill of pausing in midair and going backward as well as forward, so anything capable of such flight is a rare beast.” Business leaders also require agility—mental agility. Mental agility enables leaders to think clearly through the congestion of information—which comes in the form of e-mails, reports, and meetings—to isolate the trade-offs and decisions that will make or break their success. So, the next time you’re feeling overwhelmed by activities, climb aboard your mental helicopter and enjoy the view from a 1,000 feet. 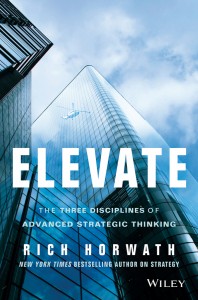