“To not innovate is to die,” remarked Apple CEO Tim Cook. At first blush, that sounds a little melodramatic. After all, many companies don’t do a whole lot of innovating and they’re doing just fine. Fine is one of those words that’s supposed to have a positive connotation, but more often than not, carries with it an underlying sense of not fine. “How was your food,” asks the waiter. “Fine,” you reply, which sends the signal that OK isn’t really what you were hoping for.

The challenge with innovation is that it can be overwhelming. From a business perspective, try to find a word that carries with it more daunting expectations. When we hear the term innovation, we tend to think of a cool new product or technology that’s going to change the world. But, that isn’t really what most innovation entails. A recent three-year study on innovation found that only 13 percent of the world’s leading consumer product companies introduced a breakthrough innovation.

Most innovation tends to come in incremental doses, even for companies known for innovation. Amazon.com’s CEO Jeff Bezos said, “I bet 70% of the innovation we do focuses on slightly improving a process. That incremental invention is a huge part of what makes Amazon tick.” And this coming from the man who unveiled delivery by drones as a potential future option.

So how do you and I apply innovation to our businesses? The first step is to understand the foundational definition of innovation: to create new value for customers. Sounds much more doable, doesn’t it? Customers may be internal, such as the sales force, or external, as in a channel customer or end consumer. When is the last time you and your team created new value for your customers?

Here are three ways you can take the concept of innovation and develop an innovative thinking mindset to apply it to your real-world work:

1. Solve their challenge. A challenge is defined as difficulty or dissatisfaction with an activity, task, or the status quo that is stimulating to one engaged in it because the solution leads to progress. Progress manifests itself in the new value produced by helping those you serve solve their problems. If you want to move out of a reactive mode, you must help your customers solve their current challenges. Entrepreneur James Dyson spent decades working on a vacuum technology to help people with the very common challenge of cleaning. He said, “I like frustration. I like seeing things in everyday life that don’t work very well and try to make them better.”

One effective way of innovating, or creating new value, is to look at your market, customers, competitors and own company, and ask, “What are the primary challenges people face?” Consider functional activities, tasks, processes, internal and external aspects. If you feel your group is too caught up in the feature/benefit battle with competitors, come back to the key challenges or problems and how to solve them in ways that introduce new value. Before revolutionizing the vacuum with his cyclone technology and see-through, bag-less canister, Dyson solved a problem many of his British neighbors who worked in their yards felt. Wheelbarrows getting their tires stuck in the mud. Instead of a “wheel” barrow, he introduced the Ballbarrow, which used a ball instead to solve the problem of the wheels getting stuck.

Innovate: What 2-3 significant challenges do my customers face that we should spend time to try and solve?

2. Jump the domain. Unlike a television show “jumping the shark” as the classic Happy Day’s episode featuring the leather-jacket clad Fonzie water-ski jumping over a shark made famous, jumping the domain is a good thing. We tend to operate in fairly finite domains of our industry, market and product or service categories. Thinking along these lines on a regular basis creates mental tracks, which streamline typical business activities. However, when it comes to thinking in different ways, these tracks can become ruts. In the Innovative Thinking Workshops I lead, we go through an exercise I developed called Domain Jumping. It’s an excellent technique to extract people from their mental ruts and give them new perspectives in which to view their business. 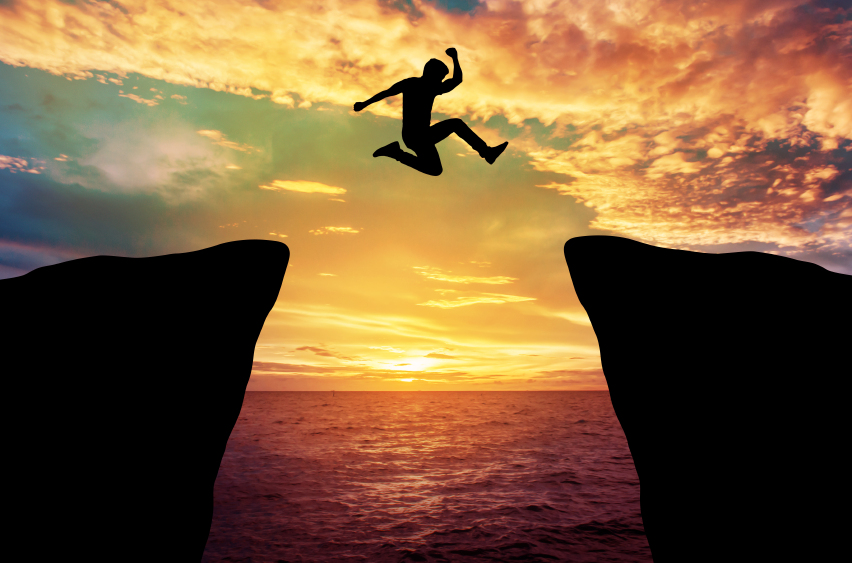 One example of Domain Jumping comes from a company called Sharklet Technologies. The company evolved from the domain jumping of Tony Brennan. Tasked with finding a more effective means of reducing the amount of barnacles on Navy ships, he discovered the composition of shark’s skin as a carpet-like material of tiny teeth. These small, bumpy scales prevent algae and barnacles from gaining a hold on the shark. After the ship application, the company moved to sharkskin-inspired, textured-film products that prevent bacterial adhesion.  Some of these products have been helpful in places such as hospitals, where light switches, handles, and counters can house bacteria that leads to a greater incidence of infections. All possible because someone jumped their domain.

Innovate: Identify a challenge your company faces and jump to another domain by asking: “How would Disney, a teacher or an Indy pit crew approach this?”

3. Deviate the norm. The norm is comfortable, expected and mediocre. Deviation from the norm is risky, nerve-wracking and uncertain. Yet, when we realize that excellence is described as deviation from the norm, we know that it’s required to innovate. If we’re doing the same normal things, in the same normal ways as everyone else in our space, then mediocrity is to be expected. It’s only when we step off the beaten path, that the beating can begin.

Another effective exercise I developed to help leadership teams think innovatively is the Norm-Deviation Matrix. It’s a methodical way to brainstorm ways to deviate from the norm, or excel, within one’s industry. One long-standing example of the norm-deviation effect in action is from Enterprise Rent-A-Car. Back in time, the norm was that to rent a car, you needed to go to a car rental agency, typically located in an airport. Enterprise deviated from that norm when they famously advertised, “We’ll come and pick you up.” That, coupled with having 90 percent of their offices in communities instead of airports, enabled them to create new value—innovate—for their customers.

Innovate:  What is an example of a prominent industry norm in our space and how might we deviate from it?

Innovation can be overwhelming and unproductive. Becoming an innovative thinker is achievable and practical. The ability to create new value for customers can transform business as usual into unusually good business. Solve a challenge, jump a domain and deviate the norm—or watch your competitors do it.