It’s Monday morning, you’ve developed a plan for the week based on your top 3 goals and your executing your strategies to achieve them. Then the email comes through from one of the top fire-starters in the group. There’s another emergency that the team needs to address. Everybody clear the decks and be available at 2 pm for the meeting. Prior to the meeting, you’re asked to prepare some ideas for discussion. Suddenly, your goals, strategies and time are up in smoke thanks to another fire drill.

The fire drill is when people stop purposeful work that is guided by their strategic plan and rush to take care of something urgent that just popped up. If the urgent issue is also important, then naturally it should be taken care of. Unfortunately, many fires are urgent but unimportant. Yet, they still get lots of attention, which wastes valuable time, people, and budget.

The fire drill becomes a habit and like other habits, very hard to break. It’s a lot more exciting to tend to something new and urgent, even if it’s not important and doesn’t add real value to the business. An adrenaline junkie likes the fire drill. And that’s not good news for the strategic people out there.

A habit is defined as, “a behavior pattern acquired by frequent repetition or physiologic exposure that shows itself in regularity or increased facility of performance; an acquired mode of behavior that has become nearly or completely involuntary.” Depending on the behavior, the habit can be positive (e.g., exercising each morning) or negative (e.g., uncontrolled gambling). The goal is to foster positive habits and transform negative habits into positive ones. As anyone who has tried to break a bad habit knows, it’s much easier said than done.

A habit consists of the following three components:

The key to eliminating a bad habit is to replace the routine, or behavior, with a more positive or productive one. By keeping the same cue and same reward, this shift in the routine can transform the bad habit into a good one. In the fire drill example, it’s to be expected that fires will continue to pop up during the course of business, even if some can be prevented by understanding the root causes in their systems. 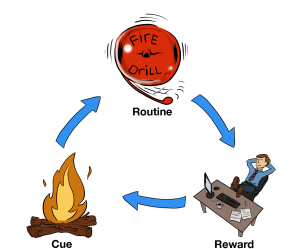 When the cue or fire triggers the habit, we need to replace the current routine—a flurry of unplanned activity—with a new one. A phrase as simple as “Let’s think about that,” can fill the routine. This phrase reminds people not to just react to the fire, but to consider it relative to the other planned initiatives currently being worked on. Do we really need to attend to this? Does this fall within our responsibilities? Who can handle this more efficiently? How did this fire start in the first place? 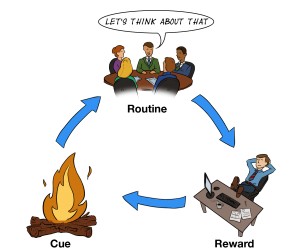 Fire drills are strategy killers. If you don’t change this habit, you and your business will continue to feel the heat.